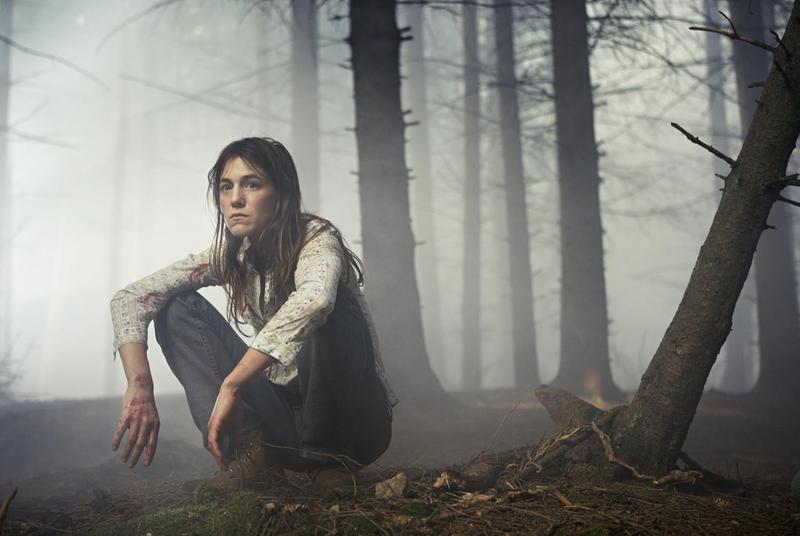 Warning: This review contains some highly explicit descriptions that may offend some readers.

Given such a pompous oeuvre, Von Trier The Man presents as a fidgety and uncertain fellow who undeniably suffers from severe anxiety and depression. This is startingly apparent through the plethora of supplementary material provided with Antichrist as he explains the depths of ‘the black dog’ that saw him conceive such a bleak film. He mutters and murmurs and looks away from the camera, but then, in the same breath, Von Trier The Film Director informs a packed press conference at the Cannes Film Festival that he is the greatest living filmmaker today. Such a dichotomy makes Von Trier an intriguing auteur if anything else, and one that legions of people love to hate, as much as venerate.

I will come clean right now and say that Lars Von Trier is not one of my favourite filmmakers and I always approach his films with great trepidation. There are instances in his works – like the absolute brilliance of the finale in Dancer in the Dark that would take a hardened heart not to be rendered mute with sobbing – that could be considered some of cinema’s finest moments. But, overall, I feel Von Trier is ‘touch and go’. He is, commendably, a risk-taker and, with any form of risk-taking, there will be successes and failures, which is something that definitely colours his creative output.

For audiences worldwide, Antichrist has proven one of those films that elicits extreme reactions and creates both lovers and haters in equal measures. It premiered at Cannes in 2009 where its reception equalled In the Realm of the Senses (1976) in terms of furor and walkouts. At the same festival, Charlotte Gainsbourg received the Best Actress accolade for her portrayal of ‘She’ in the two-person cast; her ‘He’ being Willem Dafoe who’s never shy to high-tackle controversial subject matter and ‘get his kit off’.

The plot starts with this doomed twosome enjoying a romp in the sack while their baby boy arises from his bed and plummets out an open window into the snow below. Overwhelmed with the big Gs of Guilt and Grief, ‘She’ struggles to accept the death of her child, especially as it occurred at the time of her heightened pleasure. ‘He’ – a psychologist over-stepping the boundaries of professionalism – takes it upon himself to nurse her back to mental fortitude. Bad idea. They head to their log cabin called ‘Eden’ in an attempt to reconnect with nature, happiness and, generally, convalesce. But there, their relationship rots from the inside-out devolving into mental and physical violence, most tellingly exemplified through their sex life. Viewers: Be prepared for on-screen penetration, plenty of nudity and enough ‘ugly’ fornication to turn you off sex permanently.

In discussing this film, it’s simply impossible not to mention ‘that’ scene, although my preference is not to divulge such information in a review. Nevertheless, anyone who has heard even the tiniest bit about Antichrist will know it as ‘that film with the scene of female genital mutilation’. Feminists across the globe have let out cries of ‘misogyny’ condemning Von Trier as a woman-hater – not merely for the infamous clitoral castration scene, but also for the general theme of the movie that sees Charlotte Gainsbourg’s character harbour the utmost in female self-loathing. Her line about a woman crying being a woman scheming would raise the ire of any woman – so-called feminist or not.

So it was with this preconception of Von Trier’s film that I proceeded to watch it, and was then surprisingly surprised. With an open mind, I saw it as hardly misogynist, but more about notions of vulnerability and fragility, whether they are the qualities of a woman or a man. In the case of this film’s story, though, it is the woman who is the vessel of such emotions, who has gone into steady decline well before the death of her son. In exploring incidents of gynocide throughout the ages as the basis of her academic thesis, she has accepted such criticisms of women as legitimate and started doubting her own humanity. Even though I believe Von Trier is not a misogynist, I do see him as somewhat fearful of, while concurrently fascinated with, woman – similar to the likes of David Cronenberg and William S. Burroughs – but fear is a whole different ballgame to misogyny.

By the time Antichrist gets to ‘that scene’, I’d already been unwittingly shocked by what felt like a far more brutal act of violence against ‘He’. This came out of the blue and, consequently, impacted with the appropriate shock value Von Trier intended. All this talk about the clitoral castration managed to dissolve the scene’s potency, although anyone able to watch through covered eyes will notice great pains were taken by the special effects artists to ensure the action was as real and anatomically correct as possible. In the extras on the DVD release, they talk about possibly being the only people who have watched that scene in full and able to appreciate it as an artistic achievement.

Antichrist is broken into chapters and epilogue and prologue as a way of leading the audience through the narrative progression, although the film is remarkably simple in presentation, the plot uncluttered. It is a simply stunning visually, thanks to the expertise of Anthony Dod Mantle whose cinematographic skills on Slumdog Millionaire have established him as DP du jour. There is not one ‘look’ to the film, but several, moving from the ultimate stylisation of the epilogue (shot in black and white slow-mo) to Dogme-esque hand-held moments recalling Von Trier’s beginnings as a filmmaker. Couple all of that with a naturescape that veers from beautiful to sordid and you’ve got one heady smorgasbord of visual treats ­– this alone will have some cinemagoers creaming their pants. The DVD enhances the experience with plenty of ‘making of’ material, so anyone interested in the mechanics of filmmaking can get their fill.

While Lars Von Trier somehow manages to be the off-screen star of all his films, kudos should be paid to Willem Dafoe and Charlotte Gainsbourg. The shooting of Antichrist could not have been anything but one helluva head-fuck. Carrying the film on their two amply weighted shoulders, this dynamic duo ensures every frame is compelling. While Dafoe perfectly portrays the control-freak mental mechanic who keeps his cool at every point of his wife’s grief-induced loopiness, it is Gainsbourg who shines. As a kind of child-woman, she swings from timid adolescence to sexual predator to academic intellectual in the blink of the eye. The extremes of her character are totally believable as a whole, which gives her a potency not often afforded to women on screen. I find it difficult to pin the misogynist tag on Von Trier when he’s so generously given her this meaty role.

After watching Antichrist, it took me a while to formulate my opinion. This is not an easy viewing experience and, therefore, one I find hard to recommend to anyone else. But for cinemagoers looking to broaden the limitations of their mind, Antichrist offers a delectable feast, albeit one that includes offal and gizzards as well. Take a big bite…