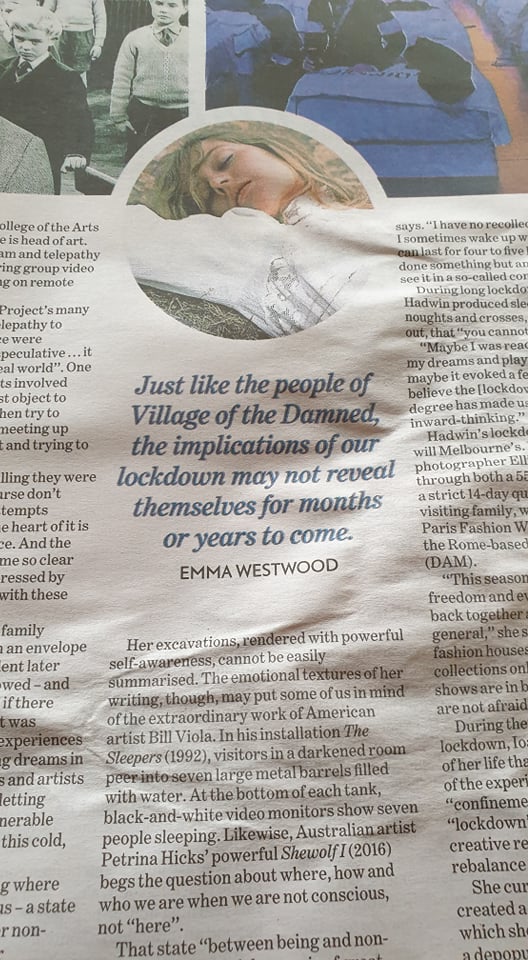 Andrew Stephens wrote an insightful article in The Age newspaper, While we’ve been sleeping, published on 15th October 2021, which looked at pandemic lockdowns through the eyes of art in all its guises. Interestingly, the art examples cited may have reflected the somnambulistic state that lockdowns create but none was created as a direct response to the pandemic.

Note: this piece reads most explicitly and evocatively to Melburnians because, so far, we’ve experienced more days in lockdown than any other city in the world.

Andrew asked me to contribute some thoughts with regards to cinema for his While we’ve been sleeping piece and, as is usually the case, I wrote far more words than was required. So, as well as encouraging you to read his full article, I will post below the rough notes that I submitted to him; a curiosity you may wish to read in full (or not, I will not judge)…

When the pandemic began, I remember watching the Korean zombie apocalypse film, Train to Busan (2016), and thinking how, probably for the first time in my life, I could relate to the events portrayed in this film in a way that went beyond empathy into lived experience. At this point in the COVID outbreak, there was a sense of panic and fear of each other that was influencing the way we interacted. We couldn’t see who had the virus, at least until their symptoms showed; we had no vaccine and we knew very little about this virus that was spreading very quickly and changing life as we knew it. The term ‘social distancing’ sprung up, although, for some people, that meant treating others like they were diseased and possibly acting irrationally or even inhumanely towards each other. You can pretty much name any zombie infection film – from the Romero zombie franchise through to 28 Days Later ­– and these once fictitious, fantastical films had taken on scarily real dimensions.

But, fast-forward almost two years, and the hysteria has subsided somewhat – mainly because this pandemic has, over time, become a way of life – and it’s as if we’re now in some sort of dream state or alternate reality because it’s still difficult to believe it is happening. This is especially relevant to Melbourne, where I live, because we’ve been in lockdown longer than any other city in the world, so everything is wrapped in this feeling of lethargy, like we’re still waiting to wake up and see what the aftermath of this situation is going to be.

In terms of storytelling, such as lengthy unconsciousness reminds me of the Washington Irving tale of Rip Van Winkle (1819), who’s induced into a 20-year sleep after he drinks liquor offered to him by strangers and then wakes up to find a whole new world, having slept through the entire American Revolution. For the almost two years that Melbourne has endured rolling lockdowns ­– the passing of uncelebrated milestones birthdays, the cancellations of annual festivals and events, the deaths of so many people; not to mention the growing up of children (two years is a long time in the life of a child) – our collective awakening will be something like that of Rip Van Winkle; that is, we are anxious about emerging to a changed world that has left us behind. The ‘virtual’ nature of our current lives only exacerbates such a feeling because we can see others, in other places around the world and Australia, seemingly getting on with things while we’re discouraged from leaving our houses. It makes you think: how will I adjust to a world on the outside and, possibly more pertinently, how can I trust that this won’t happen to me again?

As this pandemic progresses, a term I hear more than anything else is ‘groundhog day’, in reference to the film of the same name from 1993 where the character played by Bill Murray is subjected to repeat the same day over and over (and over and over) again. It’s a film that has inched its way into English vernacular over the years and, as a horror scenario wrapped in comedy, appropriately resonates with a wide body of people. However, horror tales are often the ones that acutely tap into scenarios of neuroses and paranoia so there are a plenty of horror genre examples that reflect the current somnambulistic state of society, like A Nightmare on Elm Street (1984).

Unlike the following films in the A Nightmare on Elm Street franchise, which verge on slapstick comedy at times, there is an eerie, dream-like quality that extends right through this first film that is as much aligned with insomnia as it is with sleep itself (because the characters need to stay awake in order to remain alive). For many people, lockdown has created strange and uncharacteristic sleep patterns, whether that’s extended sleep or interrupted sleep, and the confusion around information pertaining to the virus has made us all hyper-vigilant, some might say paranoid – we need to keep on top of information to protect ourselves and, so often, the information and messaging we’re receiving is confused and contrary. We’re feeling like this, but we’re also tired, which can have us merging sleep with wakefulness and, ultimately, confusing the two. A film that creates a similar sensation is Picnic at Hanging Rock (1975), which not so much echoes the lockdown experience in its plot but definitely in its feel – that muted, hallucinatory sensation where, sometimes, it feels as though we’re walking like docile cows to the slaughter.

Another horror film that talks to the lockdown experience is Village of the Damned, which has been remade and ‘sequelised’ is various guises but was first produced for the screen in 1960, adapted from a John Wyndham novel, The Midwich Cuckoos (1957). This film draws marked parallels to an extended lockdown experience through its focus on an entire village that suddenly falls into a state of unconsciousness for a period of time, which even affects others that enter dare to enter the vicinity of the ‘infected’ village. This suggests a ‘no escape’ element, which aptly describes how the energy levels (of lack thereof) of lockdown environments has a communicative effect, ironically similar to the disease itself from which we’re trying to protect ourselves. When the villagers of Village of the Damned wake up a few hours later, everything seems fine. But, two months later, it’s discovered all the women of childbearing age are pregnant and they give birth to a breed of strangely advanced, emotionally detached children who have the ability to communicate with each other telepathically. This plot progression speaks to the ramifications and paranoia of our lockdown experience – we’re not confident where we’re going with all of this, and we’re not sure of the long-term effects and what it could mean moving forward. Just like the people of Village of the Damned who immediately resume a ‘normal’ life, the actual implications of our lockdown may not reveal themselves for months or even years to come.